ZZ Top is an American rock band, sometimes referred to as "That Little Ol' Band from Texas".
Their style, which is rooted in blues-based boogie rock, has come to incorporate elements of arena, southern, and boogie rock. The band, from Houston Texas, formed in 1969. Musician Billy Gibbons and drummer Dan Mitchell, originally in a band called the Moving Sidewalks, got together with bassist Lanier Greig, forming ZZ Top. In 1969, Greig and Mitchell were replaced by Dusty Hill and (the beardless) Frank Beard from the band American Blues. 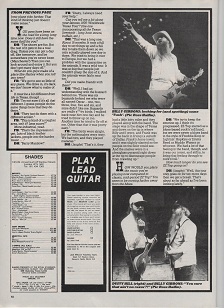