The band whose image and sound was somewhat similar to 80's-era Kiss were dropped from their record label in late 1986 after executives saw no potential hit singles on their self-titled debut album. In 1998 St. John was offered a contract with a small record label to record a new album with the band, which resulted in 1999's Raw which featured 20 previously unreleased demos and outtakes. On April 5, 2007, Mark St. John died from an apparent cerebral haemorrhage at age 51. 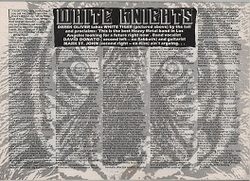