The Riverdogs is a rock band, founded in Los Angeles in the early 1990s.

Following an introduction to guitarist Vivian Campbell, formerly of Sweet Savage, Dio, and Whitesnake, Campbell agreed to produce Riverdogs first demo. Vivian was so impressed by their talent; he joined the band for their debut-album, released on Epic Records in 1990, winning a prestigious Edison Award in The Netherlands. Soon after, drummer Marc Danzeisen joined the band to complete the line-up. Though fans and critics gave the album a warm reception, lack of support from their record label eventually led the band members to go their own way, with Campbell settling into the Def Leppard line-up and Nick Brophy becoming a respected engineer and producer. The band still gets together to play for fun and have released a new album in 2011 on Melodicrock Records. 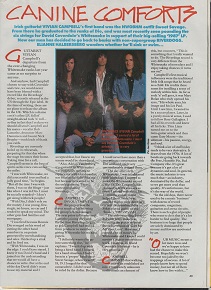