Ratt is an American heavy metal band that had significant commercial success in the 1980s. The band is best known for songs such as "Round and Round," "Wanted Man," "Lay It Down," "You're in Love", "Slip of the Lip", "Back For More", "Dance", "Body Talk", "I Want a Woman", and "Way Cool Jr." Ratt has been recognized as instrumental in the formation of the early 1980s Los Angeles hard rock and glam metal scene.

Their 7th studio album, Infestation, was released April 20, 2010. The band is currently on an indefinite hiatus. 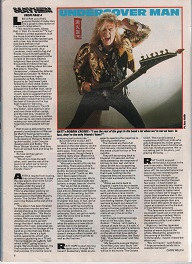