Manowar is an American heavy metal band from Auburn, New York. Formed in 1980 the group is known for its lyrics based on fantasy (particularly sword and sorcery) and mythological topics (particularly Norse mythology) along with their "loud and bombastic" sound. In an interview for MTV in February 2007, bassist Joey DeMaio lamented that "these days, there's a real lack of big, epic metal that is drenched with crushing guitars and choirs and orchestras... so it's nice to be one of the few bands that's actually doing that." In 1984 the band was included in the Guinness Book of World Records for delivering the loudest performance, a record which they have since broken on 2 occasions. They also hold the world record for the longest heavy metal concert after playing for 5 hours and 1 minute in Bulgaria in 2008. 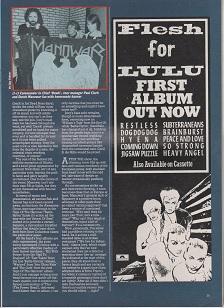