Holly Knight is an American songwriter and singer, who has written or co-written songs for Aerosmith, Bon Jovi, Kiss, Pat Benater, Lita Ford, Tina Turner, and many more. She was born in New York City and started playing classical piano as a young child. She soon became interested in rock music, and left home at about sixteen to pursue her dreams. Five years later, in the early 1980s, her band Spider (featuring Anton Fig of Late Night Show with David Letterman) got a recording contract with Dreamland Records, released two albums - Spider (self-titled-1980) and Between the Lines (1981) and was managed by Bill Aucoin of KISS and Billy Idol fame. She had a second band called Device in the mid-1980s, who had a hit with "Hanging on a Heart Attack" off their 22B3 album.

The Dreamland president, songwriter and record producer Mike Chapman, urged her to leave the band and go to Los Angeles, California to pursue her songwriting career. She worked for his publishing company and then for EMI Publishing for many years.

Knight and Chapman worked together on Top 5 U.S. hit "Better Be Good to Me" by Tina Turner and Pat Benatar's "Love Is a Battlefield", each of which won a Grammy Award for Best Female Rock Vocal Performance. She also co-wrote the highly successful song "The Best" which was a #1 single around the world for Tina Turner. 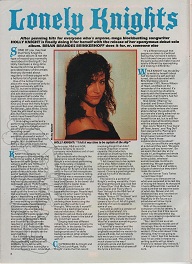