Grim Reaper are a British heavy metal band from the New Wave of British Heavy Metal era. The band was formed in 1979 in Droitwich, England, by guitarist Nick Bowcott. They were discovered after winning a Battle of the Bands featuring over 100 bands. They were eventually signed to Darryl Johnston's Ebony Records, and their debut album was See You in Hell. The album was released in 1984 and was distributed worldwide through RCA Records. 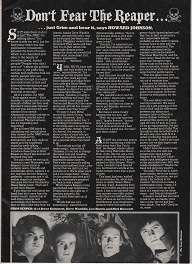